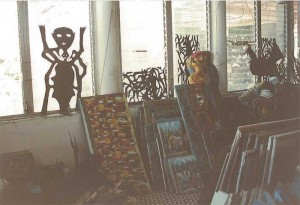 People might not believe it if you say that Haiti, the economically poorest country in the Western hemisphere, is the richest in visual expression. But it’s not hyperbole.

This true statement is justified by sound reasoning, since some Haitians who become artists are able to lift themselves and their families out of poverty and into a status of middle class or even wealth. The most successful ones have travelled to other countries as honored guests, as their artwork made its way onto the walls of museums in Europe, Canada, and the United States. As scholars like Selden Rodman and authors like Andre Breton brought attention to the wonders of Haitian art, collectors caught Haitian art fever and made pilgrimages to the country in search of greatness.

They didn’t have to look far. But navigating the gallery scene in the period from the mid-1980s to the early 2000s required a force of will and determination that put one’s patience to the test. After a day of pawing through hundreds of dusty canvases in un-air-conditioned galleries, always in search of the next most wonderful thing, I would be completely spent by around 4 p.m. and almost unable to move out of my hotel bed for dinner in the restaurant downstairs. I was also visually over-stimulated by a surfeit of beauty. My dreams followed suit with a cacophony of competing images.

I was always thrilled with my purchases, no matter where I found them. Atypical of the galleries I most enjoyed visiting with their vast variety and low prices were those owned by the Nader family, including the large one owned by Georges Nader in downtown Port-au-Prince, the gallery of his son, Georges Nader Jr., in Petionville, and the son’s cousin, Habib Jiha with his own space a few blocks away. These were spotless places, easy to navigate, and well-illuminated. But the sticker shock on the beautifully framed paintings often sent me away without anything. To their owners’ credit, these comfortable, pristine spaces could easily have been transported to Paris, Quebec, or New York.

The real treat in gallery hopping for me was in places like the gallery of Issa el-Saieh, up the steep road from the Hotel Oloffson in Port-au-Prince. In a country where paintings literally hang from trees, Issa adhered to a standard of excess in his gallery that I found overwhelming at first. There seemed to be absolutely no sense of order. Metal sculptures were leaning against closed jalousie windows. Figurative papier-mache sculptures of prodigious size, much bigger than the average suitcase, were moved so far out onto the tile floor that pathways between the artworks were challenging to navigate. Prices weren’t on stickers on the backs of artworks — you had to ask what they were.

Visiting Issa’s jam-packed space proved to be a treat over the years. I always looked forward to exploring there, because he always had new things and it was impossible to see everything on one visit — no matter how enthusiastic I was.

That changed one year when I stayed with my California friend Angela Winquist at Issa’s home, adjacent to the gallery. I remember it being filled, naturally, with exceptional art, including a large, unexpected painting by Jacques Richard Chery in his living room. This day-in, day-out access to the gallery allowed me the luxury of going through all three rooms, with stacks upon stacks, and things going sideways.

Issa always knew where to find things. If, for example, you found a painting of ducks by Antoinette “Josie” Valmidor, the “cook woman” in Issa’s kitchen, and wanted to see more of her work, Issa knew just where to find it. This led one to believe that the appearance of randomness and disorganization was only in the eyes of visitors, and not in the mind of the owner of the place.

It was at Issa’s that I found works by Antoinette  “Josie” Valmidor’s brother Jacques in bright primary colors — a wedding scene, a family at a picnic, a fantasy landscape with a castle, and chickens as glorious stars of their own canvases. While you could find the expensive artists, too, it was the discoveries of artists that no other gallery had that helped make visiting this gallery so special.

I loved sitting with Issa near the shutters in the main gallery, drinking sweet cups of expresso on hot mornings, talking about various things. He was a true character. During one visit, he tried to talk me out of a painting I had found in his gallery. What kind of gallery owner does this? But Issa was insistent. “Selden Rodman saw it and didn’t buy it,” he warned me of the 24-inch by 24-inch painting in black-and-white by Saint Soleil master Levoy Exil.

This wasn’t enough to dissuade me. I bought the painting, kept it, and still get great pleasure not only from the work, but the story that accompanies it.