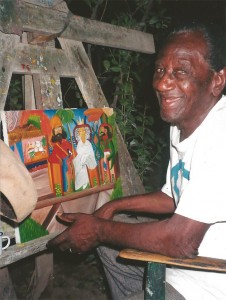 Andre Pierre at his easel in Croix-des-Missions, Haiti
Photo by Candice Russell

When I was the art critic for City Link weekly newspaper in Fort Lauderdale, Florida, I wrote about esteemed Haitian painter Andre Pierre, who was age 84 at the time. The story appeared in the December 16, 1998 edition of the publication, along with my photo of the artist sitting next to his easel with a nearly finished painting of his beloved Vodou spirits. I remember Pierre always welcoming me as a guest, no matter what he was doing or what deadline constraints he experienced when producing the next painting. In the next few weeks, this City Link story will be published on this blog in its entirety.

“This is it?,” I asked my driver with dismay as he turned the car into a dirt driveway leading to the home of Haiti’s most famous living artist, Andre Pierre. Instead of the comfortable residence I expected were sparsely furnished concrete cubicles, with people cooking outside on open fire. The smell of charcoal was thick in the later afternoon air during that first meeting in 1985. I couldn’t reconcile my knowledge of Pierre, celebrated in books and museum exhibits from the U.S. to Europe, with the humble reality of his circumstances.

There was no visible evidence of his fame or wealth. Yet auction houses in New York were selling his works to eager collectors, and galleries in Port-au-Prince priced his mystical canvases in the thousands of dollars. Was the artist being gypped by gallery owners? Were relatives ripping him off? Or was he a too-frequent gambler at the lottery shacks that line the  main town road?

Answers were provided in subsequent visits over the years. Pierre, whose work is currently on display at Fort Lauderdale’s Needlepoint Originals/Paradise Gallery, supports a large extended family, including 18 children (some gown and living in the U.S. and Canada) by six different women (12 other children have died). Some of his money goes to farming his own land.

The fact is, this isn’t a man whose ego depends on material proof that he has more than most others in Haiti. His contentment comes from contact with a world that the faithless don’t see.

That he is beloved by those close to him becomes obvious in another meeting with Pierre just last month, on the weekend honoring the Guede spirits governing the dead. While this 84-year-old tells jokes about his jet-black, obviously dyed hair, his middle-aged son-in-law in a Tommy Hilfiger t-shirt fields a call for him on a telephone with five lines. In saying goodbye to Pierre a few minutes later, the son-in-law affectionately rubs and cradles the old man’s head.

Strong, already sweetened Haitian coffee is served to us in small, flower-enameled cups by a young woman. Before he drinks, Pierre pours the coffee in three places on the ground as a way of honoring the circle of life. When one guest refuses the coffee, he insists that she must drink, because she is in the presence of all the people in her family who lived before her. Pierre explains in French, “We all come from the earth and we’re all going back to the earth. We exchange things with it when we eat and drink.”