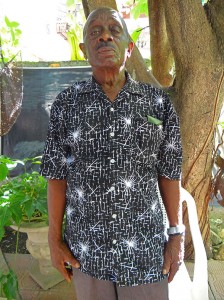 How lovely to hear from Reynald Lally, a gallery owner in Haiti, wishing me a happy new year and updating me on the famous Haitian artist La Fortune Felix. A picture of the artist was attached to the email. He is wearing a nearly identical expression as in a photo I took of him at his St. Marc home in the late 1990s.

The place of La Fortune Felix, born in 1933, within Haitian art has long bothered me. He hasn’t yet received the acclaim and adulation of his peers. Yet few among his generation of artists have lived as long and produced as many worthy paintings, each decidedly different from the last.

This latter point was made to me with someone in a privileged position to study and appreciate the paintings of Felix — his exclusive dealer in Haiti, the late Dr. Carlos Jara. It was my friend Carlos who owned the largest number of Felix paintings among all collectors. Years ago, he took me to a large home in Petionville (not the place where he lived) to show me stacks upon stacks of them. Carlos, with his discerning eye and impeccable taste, named Felix his favorite artist. In his estimation, no one else came close, though there were many superior paintings by others on which he lavished praise.

The observation by Carlos about the variety in Felix paintings rings true today. The artist has worked in a remarkably consistent style. But the greatest admiration is due his imagination and the unending wellspring of creativity that informs his scenes of Vodou (voodoo) personages, officiants, celebrants, and ceremonies. His paintings are narratives with a lot going on, rather than placid representations of Vodou (voodoo) spirits in mortal form.

Without an education in Felix’s remarkable oeuvre, one doesn’t have to look far on the Internet to gain a working knowledge of what makes the artist so special. On the web site of Galerie Macondo in Pittsburgh, Pennsylvania — www.artshaitian.com  — you can find his painting “Family Travail” with women, men and children working in preparation for a ceremony. They occupy a green glen where flowers bloom and vines wrap around a tree. Every action, every living thing seems to be in perfect harmony.

Paintings by La Fortune Felix from the web site of the Haitian Art Company in Key West, Florida are similarly alive with activity. One untitled work shows a line of men and women carrying a fruit basket, bundles of twigs, and axes as they walk down a steep path to a woman digging a hole in the ground. Is she working on a fire pit or a grave? In another untitled work, a bearded man with a sword prepares to sacrifice a pig. He appears to be dancing. Around his waist is an oversized beaded belt. The scene is set in a shadowy place with curtains of green and yellow foliage punctuated by red flowers.

A master of drama, Felix was given a chapter of his own in the seminal book “Where Art is Joy: The First Forty Years of Haitian Art” (1988) by Selden Rodman. The author says that he and museum director Pierre Monosiet discovered the artist about the same time in the late 1970s. A change in his work came when Monosiet encouraged him to switch from slowly-drying oil to  quickly drying acrylics. “His inspired colors come from the fast-drying acrylics: he plays with his colors as Hyppolite never could,” said Monosiet in the book.

But even a critic and scholar as astute as Rodman could be mystified by the paintings of La Fortune Felix. He asks rhetorical questions about “Mambo with Telephone Poles” pictured in “Where Art is Joy,” wondering about the origin of huge hands and certain objects in the painting: “I could have asked the artist but preferred to let the mysterious picture remain mysterious.”

Ah, and therein lies the attraction and unexplainable pull that Felix exerts on his admirers. All cannot be known about many of his paintings. Yet we want to know more in order to understand and enhance our appreciation for his work. But is this necessary? Or is it even possible?

Other books about Haitian art ignore the artist altogether, an oversight explained as either a reflection of someone’s collecting taste or access of the collector to the artist’s work. Felix is left out of another significant publication of that decade, “Haitian Art: The Legend and Legacy of the Naive Tradition” (1985) by L.G. Hoffman.

But other books are catching on to the Felix magic. He is included in “Haiti: Anges & Demons” (2000), written in French. He is called an artist from the primitive tradition whose iconography includes supernatural characters and their attributes, like the cross of the Baron, the boat of Agoue, and the snake of Damballah. His paintings — revealing and surprisingly different from others that we have seen published — are pictured in this important book.

There is no equivalent of La Fortune Felix in Haiti, now or ever. There is no second generation of Felixes, carrying on his tradition of Vodou art. Perhaps this uniqueness as a houngan or Vodou (voodoo) priest will elevate him to the top ranks of conversations, articles, speeches, and books about Haitian art in the future.

At least in certain group exhibitions, he is getting his due. Felix was part of the significant “Kafou: Haiti, Art and Vodou” at Nottingham Contemporary, a museum in Nottingham, England from October, 2012 to January, 2013. This is well and good.

But where is the solo show Felix so profoundly deserves? When is the bold curator at one of the major U.S. museums with substantial Haitian art collections going to step up and present a comprehensive, decade-by-decade celebration of La Fortune Felix, along with a scholarly catalog with essays by various people? We are waiting for someone to heed this overdue mandate.