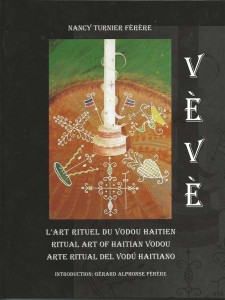 Anyone who is committed to Haitian art has books to support this interest.  From time to time, I will analyze the books in my personal library that expose Haitian art in creative ways.

“Veve: Ritual Art of Haitian Vodou” (2005 from ReMe Art Publishing and Sandra Osse) by Nancy Turnier Ferere, with an introduction by Gerard Alphonse Ferere, is a full-color, hardback book with an abundance of illustrations. It is one of the best books for identifying veves — the ritual drawings made on the floors of Vodou temples from easily sifted materials through the fingers, like flour or coffee grounds. Naturally, the artist in Ferere cannot help but add her own imaginative flourishes to these designs symbolic of the lwas or spirits in the Vodou pantheon.

The book, in English, French and  Spanish, is also a gold mine of explanations about the religion. For Hounto, the lesser-known spirit of Vodou drums (essential to any ceremony, as well as key in Haiti’s history to become the world’s first independent black rebpulic in 1804), the author writes about the significance of drums, “As consecrated instruments, they are supposed to have the power to communicate with the lwas and facilitate their trip to earth, by producing rhythms that are the reflection of their traits.”

Ogou Feray has a triangular base with a center pole and three rounded shapes of differing size upon it. This is the “lwa of metallurgy and patron of blacksmiths, the Vulcan of Haitian Vodou.”

I know from my other books that Ogou Feray is associated with war and victory in battle. His favorite colors are blue and red, the colors of the Haitian national flag.

Ferere pictures Simbi, lwa of rivers and lakes, as a circle with a feminine border adorned with curlicue shapes and multiple points or little stars to ward off evil. The power of water and aquatic vegetation is this male spirit’s domain. She writes, “According to a legend, Simbi, like LaSiren, often takes women away with him under water, keeps them for awhile, and releases them after granting them healing powers.”

The lwas have definite preferences. But they act on people’s behalf by returning favors for obedience to their demands by influencing romantic relationships, the fate of crops, matters of justice, and economic prosperity, among other important areas of life.

In the thoughtful introduction by Gerard Alphonse Ferere, he writes about the lwas: “These are not individual gods, but instead the multiple manifestations of a unique God. When it comes to their hierarchy, in spite of the differences that may exist as to the importance of their respective responsibilities, they can only be equal, since they are all the same God. This mystery of multiplicity of persons in a single divine entity exists in many religions, including Christianity.”

Who can deny the power of Ferere’s conclusion? He writes, “People who accuse Haitian Vodou of ‘primitivism’ do not realize that, beyond its religious functions, it constitutes an enormous cultural wealth. Indeed, more than religion, it is also tradition, family, lifestyle, social life, folklore, literature, music, dance theater, visual art, etc.”

Vodou is Haiti and Haiti is Vodou, an inextricable linkage worthy of celebration. This exemplary book only adds to the serious literature on the subject and the art of Haitian Vodou.