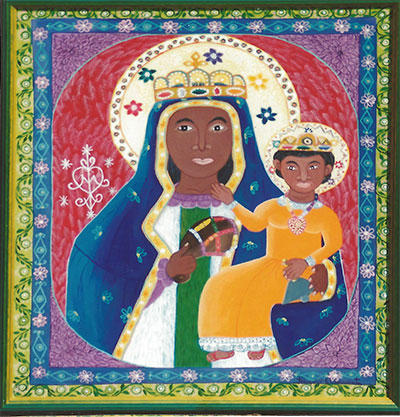 During a visit to the Petionville, Haiti home of Saint Soleil painter Louisiane Saint Fleurant, I asked her why there were so few female Haitian artists. Her answer was simple and unassailable, “Because women do all the work.”

Is it so different in other countries, like the United States? Even if women work outside the home, they still have to manage the household, feed the family, wash the clothes and dishes, and nurture husbands. The same is true in Haiti, where women often walk miles to the marketplace, balancing baskets of fruits and vegetables on their heads. They sell their edible goods all day long, then walk home, where a different kind of labor begins until bedtime.

Saint Fleurant’s explanation is underscored by the short list of famous women artists in her country. The others are Luce Turnier, Marie Jose Nadal Gardere, Iris (she only goes by one name), Francoise Eliassaint, Antoinette (“Josie”) Valmidor, Myrlande Constant, Evelyne Alcide, Amena Simeon, Mireille Delice, and the Benoit sisters. The last five women, by the way, are all makers of Vodou flags, an art that involves sewing, commonly characterized as women’s work. Certainly, there are more female Haitian artists than this, but the number is pathetically small when compared to the number of men involved in creative endeavors.

For some women in Haiti, who come from the middle class or higher up the economic chain, taking up art was a natural progression in their education. For others, it was a matter of exposure. Antoinette “Josie” Valmidor was the cook in the home of gallery owner Issa el-Saieh in Port-au-Prince. Her brother, Jacques, who also worked there, became an artist who sold his paintings in the gallery. His sister followed suit.

Exposure was also the key for Francoise Eliassaint. Sitting next to famous artist Andre Normil, her boyfriend and then her husband, she watched him paint every day in Issa el-Saieh’s downstairs studio. She was motivated eventually to try her hand on canvas, with impressive results.

Then there is the question of gender differences in the art produced by women and men – an issue brought up in hot debates among feminists in Western countries. Is there such a thing as art made by women and art made by men? Can it be easily identified as such? While it’s true that Louisiane Saint Fleurant’s nearly exclusive province on canvas was women and children, home and animals, a male artist could just have easily have created the same imagery. She did stray into less figurative and realistic depictions, but even these seem to portray just women.

An apt comparison to Saint Fleurant would be the other artists in the original Saint Soleil group, all males. Dieuseul Paul, Prospere Louis, and Denis Smith populate their paintings with figures that are neither female nor male, but somewhere in between – creatures growing into one or another gender prior to birth.

The exception in the Saint Soleil group is Levoy Exil, whose reverence for women as the source of creation inspires almost every work he ever painted. This is discernible in his paintings by their dresses, their hair (wild and electrified, like 1960s’ black civil rights champion Angela Davis) , and faces. Men don’t seem to be a part of Exil’s visual lexicon.

Another male artist who glorifies women repeatedly in his paintings is Fritzner Alphonse. Whether he portrays a market woman with a blue face or a lounging lovely lady in a transparent gown, he is clearly obsessed with the female face and form. He even creates nudes, amply curved beauties in outdoor settings, who have no shame about showing off their bodies. I am hard-pressed to think of another Haitian artist who has done more to shine a light on women and expose their beauty than Alphonse.

As for Vodou flags, those by Myrlande Constant don’t look “feminine” and those by Jean Baptiste Jean Joseph, a man, don’t look “masculine.” It is in this medium that trying to figure out the sex of who did what goes out the window, which is probably where it belongs.

While the entire argument about gender identification in Haitian art is spurious, I do understand the rational by some women artists not to be identified foremost or only as “women artists,” but just as artists. They don’t want to be ghetto-ized, pigeonholed, and even trivialized. They are just as capable, creative, and deserving of praise in Haiti as the male artists.