In the world of Haitian art collecting, the most popular media are paintings and Vodou flags. And why not? They are decorative, specific to the culture, and transcendent in their expression of life and spirituality.

Some people would even quibble with the term “art form” because they relegate anything not painted on canvas as craft and, by extension, of lesser importance. But this is a skewed perspective without appreciation for the medium.

This week, I discovered photos I took of the cemetery in Croix-des-Bouquets, Haiti -- where the crosses of Georges Liautaud caught the eye of DeWitt Peters, head of Le Centre d’art in Port-au-Prince, beginning in the 1940s. A curlicue cross of Liautaud’s design stands above the arched gateway to the cemetery as a lasting tribute to the deceased and his own genius.

Liautaud, of course, was the man who got the ball rolling on this medium. This blacksmith was encouraged by Peters to create animal and human shapes.

Selden Rodman in his book “Where Art is Joy: The First Forty Years” (1988), writes about Liautaud: “Something almost supernaturally elemental was released in the soul of this man by the idea that art could be a full-time occupation, and that its forms need have no limits except those imposed by an artist’s poverty of imagination. Liautaud’s imagination was boundless. Very quickly, he tired of variations on the cross. For a while, he experimented with three-dimensional figures as minimal as weathervanes. Some had perfunctory arms bolted to their sides with nuts and washers, their ears punched out of the metal skull with the flaps serving as lobes.

“Others had such accessories as pork pie hats and macoutes (the Haitian peasant’s straw satchel) attached to the skinny figures where appropriate. Then Liautaud shifted to two-dimensional figures: cripples, mermaids, lovers, equestrians, metamorphic representations of the loas (lwas), their flat androgynous bodies sometimes having double goat’s heads or serpent’s arms, supported in one instance by triple snake legs with lizard claws.”

As for explanations of the work from the artist himself, Rodman succumbs to the pointlessness of the process: “The only real key to the simple profundity of Liautaud’s art lies in a humble subjugation to the spirit of Haiti itself.”

But how exactly did Liautaud create his highly prized artworks, unique in the world? Rodman says he was using the steel drum: “Cutting the sides in half, he flattens it to a three-by-six-foot sheet and then transfers the patterns, which he had previously drawn on paper, to the metal with a piece of chalk. He uses different sizes of chisels and dies and a large hammer to cut and mold the designs. He smooths out the steel’s rough edges, beats out the convex and concave shapes…” 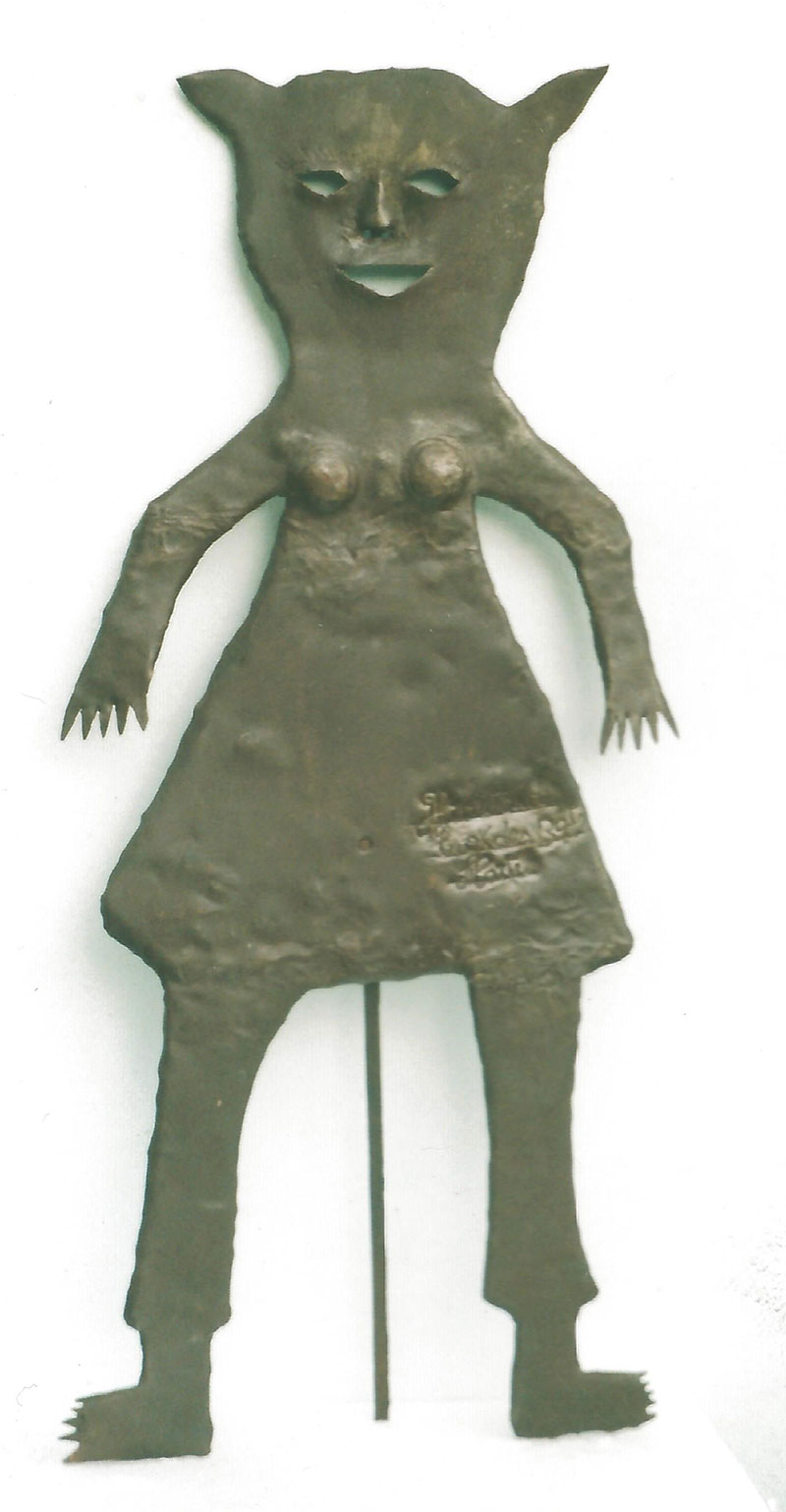 Mortal and spiritual mix in the figurative art of Liautaud. The prominent breasts and A-shaped dress of “Figure with Pretty Eyelashes” denote femininity. But protruding from the bottom of the skirt on this figure are barefoot legs in pants, suggesting masculinity at the same time. Rather than having human ears, the figure has what could be horns or small, cockeyed dog’s ears. The work is about the malleability of gender and the transformative power of Vodou (voodoo). During the Guede ceremonies in early November, honoring ancestors and spirits governing the dead, men masquerade as women and women as men.

I was lucky enough to buy a Liautaud cross during a Slotin Folk Art Auction in Buford, Georgia a few years ago. Made from forged iron and measuring 20 ¼” inches by 9 ½”,  it bears three hearts and four large letter “C” shapes to complete the curvy design. The straight lines of the cross are softened by the roundness of the hearts and “C” shapes, proving Liautaud’s mastery of contrast and design. The piece echoes the cemetery crosses that got him noticed more than a half-century ago.

Liautaud has no equal when it comes to depictions of the signal episode in Christianity – Jesus on the cross. It is a theme the artist repeated with variations. The crucifix by Liautaud depicted in my book “Masterpieces of Haitian Art” (2013) conveys a stunning solemnity. Pared down to the essentials, the work isn’t concerned with the son of God’s facial expression, but the moment of transcendence from one plane of reality to the next.

Subsequent generations of artists have taken Liautaud’s lead, turning Croix-des-Bouquets into the go-to place of metal art. He has worthy successors, such as Serge Jolimeau, who has no construction about creating huge pieces displayed in the gallery adjacent to his studio and priced in the thousands of dollars. I visited there once, courtesy of my late friend, the psychiatrist, diplomat and Haitian art dealer, Dr. Carlos Jara.

Even while Liautaud was alive, fakes of his work were being created and circulated in Haiti. Dr. Jara knew who was making them. He even bought some of them for educational purposes and put them in his living room, wrapping their necks in small red cloth scarves. He put the sculptures next to his collection of real Liautauds and asked visitors to discern the fakes from the real ones, which was a challenge. After guesses were made, Dr. Jara conceded he couldn’t tell the difference between the authentic Liautaud pieces and the imitators, unless he had the red scarves on the pretenders.